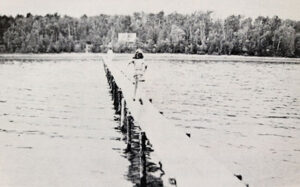 As I reach the Labor Day of my life, I think back on all the summers I have spent in Door County and of the tremendous effect these golden seasons have had on my life. In sorting out these recollections, probably the most potent and pervading influence comes from Lake Michigan itself. Recently, in reading “The Professor’s House” by Willa Cather, I found a passage that reflected my own feelings. “From the window he could see, far away, just on the horizon, a long blue, hazy smear – Lake Michigan, the inland sea of his childhood… The sun rose out of it, the day began there; it was like an open door that nobody could shut… it ran through the days like the weather, not a thing thought about, but a part of consciousness itself.”

Bay View, our old cottage on North Bay, was built by my great grandfather, Albert Hakes, in 1898 as a honeymoon cabin for his daughter, Claudia, when she married my grandfather, Harry Hough. My father inherited this piece of frozen history with its kerosene lamps, outhouse, old icebox, woodstove, and rough-hewn beams on the shore of North Bay. From July first to Labor Day each summer, it was our home. In the early 1930s, we carried water in pails from the lake to the house, but a well was dug in 1935, so we had drinking water at the house and used the lake for an ice supply and for bathing and laundry.

Far above and beyond its practical uses, the lake was powerful, omnipotent, and compelling. It guided our emotional life as well as our everyday activities. We would plan our days according to the mood of the bay. Warmth and sparkle and an east wind would invite us to swim. A cold mist or rain would send us scurrying for our novels to read in a corner of the upstairs loft. A storm with angry purple and torrid green breakers would compel us to run to the shore to protect the boats and share the excitement of nature on a rampage. I always had the feeling that the lake was speaking directly to me with messages of joy and strength and courage, not to mention fear.

In 1986 Lake Michigan, as we all remember, expanded its powerful presence, and destroyed or threatened docks and pavilions, tree-clad banks, and even shore-built homes. We were at its mercy, realizing the potential power of the “great inland sea” against our insignificant human resources. This crisis brought to my mind the opposite condition in the 1930s during the dust bowl years when Lake Michigan shrank and pulled back its borders leaving shore property far from shore and large piers and docks landlocked and useless. The old hand of Door County told us at that time that the lake rose and fell in seven-year cycles but having now lived through a number of these cycles, I have found this to be pure myth. 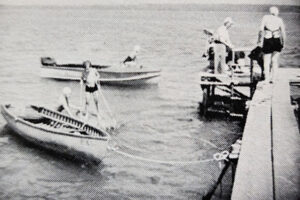 At North Bay, the problem we faced in the 1930s was a very large expanse of rocky beach and an even greater expanse of shallow water covering smaller slippery rocks which ended 600 feet out in the lake, turning to a lovely sandy bottom. Since the lake was an essential part of our summer living, my father put on his engineer’s hat and figured out a way out of our dilemma. He had cedar posts hammered into the shallows of the bay in front of the cottage and laid wooden planks on them. These extended 600 feet into the lake terminating in a cribbed rectangle at the end complete with wooden benches and a ladder on the side for swimming purposes. Even at this distance from the shore, the water was only waist deep, but the bottom was sandy, and the boats could be moored. In the winter, the planks were removed by Otto Strege, a local farmer, and friend of my father. They were stored in a wooden pavilion built into the hillside of the shore. 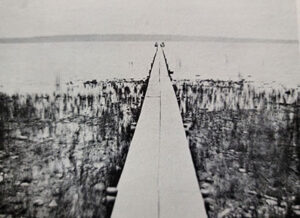 This 600-foot, two-block long dock was like a magnet in the North Bay community. It became a mecca for swimmers and boaters and a social center bringing untold excitement into my young life. The Repps, Rusys, Kimballs, and Beamers met to swim and sing and enjoy summer fun with our family. Glen Anderson even dared to ride his bicycle on the two-plank dock with the waves moving dizzily below. The pavilion hosted beach parties where the banjo ukulele rang out across the water. And the beach itself was a constant joy. Frogs hid beneath the stones and blue fringed gentians dared to grow in that rocky soil.

Today, the lake waters cover all these memories. There are more cottages along the shore, and life is easier and more luxurious. But, fortunately, Lake Michigan is just as primitive, unpredictable, and compelling as ever.