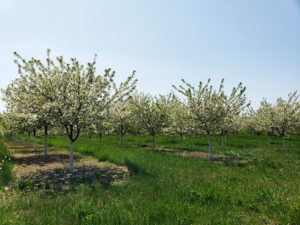 They almost killed the golden goose when they clear-cut the pine and milled the remaining hardwoods. The somewhat alkaline and shallow soil that topped the Niagara Reef in Door County was poor farmland. But it could grow trees.

Someone found that fruit trees liked the limestone, and dooryard plantings of cherries and apples prospered. Then other founds there was a ready market for tart pie and canning cherries and the first orchards were planted. Many trees were planted with a half-stick of dynamite to break up the limestone and give the roots a start in the rock fractures. The trees did well, but frost was a constant threat at blossom time so south-facing slopes and land that sloped toward the water became desirable as orchard sites since they seemed less susceptible to frost. From 1910 to 1920 hundreds of thousands of cherry trees were planted in and over the rock.

Once in the orchard business with the requisite machinery (sprayers, tractors, discs, and ladders), many growers found it practical to combine their cherries with other fruit, and the Door Peninsula produced many tons of apples, pears, and plums. Today remnant fruit trees flower among remote woods and fields. Forest birds and animals find a bearing apricot tree or a heavily loaded crab apple in the heart of thick woods, and the motorist or biker encounters a bower of blossom and perfume in late spring.

But the orchards have changed from intensive cultivation to sensible green sod. Now we notice ragged stumps where acres have been abandoned, often replanted to evergreen trees, and making a fine crop of second-growth conifers.

We used to painstakingly hoe out the squares of grass that the disc wouldn’t reach around each truck until a well-kept orchard consisted of tree trunks in an unlimited acreage of finely tilled soil. And spraying wearing old coveralls stiff with many fine coats of copper sulfate and lime sulfur, we sprayed with a patient team of horses dragging the heavy rig through the orchard rows. Each spray had a name taken from the stage of bud and blossom development at which the spray was to be applied – dormant, pre-pink, pink, petal, calyx, etc.

Sprays were applied to control blight and coddling moth, about the only enemies our orchards had then, so we didn’t need powerful or dangerous toxicants that threatened wildlife or humans. But at blossom time we lived in a cloud of spray with blue haze in our hair or on our whiskers, clothes, skin, and we smelled sulphurous, like creatures born in a volcano.

Once a hired man accidentally blasted one of our horses in the rump with a spray gun, venting 300 pounds of pressure. Sprayer, team, and granddad all went for a wild ride to the end of the row.

Much of the picking was done by neighbors. Whole families arrived early in horse-drawn rigs with their lunches packed and put in long days straddling the picking ladders and carrying their bulging 5-quart pails to the checking shed for credit. A champion picker might run up a score of eighty pails. Many of the harvest crew liked to sing, their voices floating across the orchard with popular songs of the ’20s, like “Bye-Bye Blackbird”, “Beautiful Katie”, or “Madamoiselle from Armentieres”.

When the orchard got too big for local labor to harvest, we tried hiring your girl members of a church camp as an army of pickers. The girls were somewhat intractable. They came with their tiny noon lunches consisting of one small sandwich and sometimes an apple. At one time they revolted and locked their supervisor in the restroom at the camp and made their own lunches, with two sandwiches. My mother feared they might starve and brewed vast kettles of soup and other supplements to their meager rations, and the girls picnicked happily at noon.

The day of these colorful cherry pickers passed, and the next band of imports were reservation Indians, who were good pickers; then a scattering of “Latinos” from Mexico and Texas. One of our best pickers, a white man who was a sort of hobo, hired a small boy to tote his filled pails to the checking shed, and by starting her day at sunup managed to pick ninety 5-quart pails of cherries in one working day. His record lasted for years but a mechanical shaker would make it look laughable today.

The machines vibrate the fruit off the trees and onto a canvas funnel. Picking is now mostly mechanical. Growers no longer feel they have to have part of their crops in early varieties to attract and hold pickers until the later and heavier-bearing varieties are ripe. The only manual operation left if pruning, which is done in winter when the trees are dormant in deep snow. We often wore snowshoes or skis when pruning.

The land has turned itself around, from pine forests of the pioneers to orchards, and in many places back to pine again. Time is the great healer. Give the land enough time, and it will heal itself!