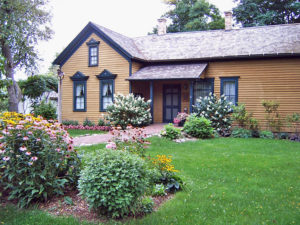 Alex and Emma Anderson and their two children, Ivan and Scione, lived in the “farm house that came to Sister Bay over the ice from Marinette,” as it was known locally. The 1875 farmhouse was dragged up the hill after arriving in the Little Sister area of the Green Bay waters in 1895. It stands where it was originally placed, just south of Sister Bay where Hwy 57 intersects with Fieldcrest Road and Country Lane.

Emma became a widow in 1915 and was left to raise her two children by herself. You will see where she sewed clothing for friends on her old treadle machine in the farm kitchen, and where she made cookies for the children in the neighborhood on the old cook stove. It was that old stove that provided heat for the family in the cold Door County winters.

When Emma remarried in the 1930s, the family moved to Ohio and although some distant family members used the home in summer, it eventually fell into ruin.

Today, thanks to far-sighted preservationist David Lee, the farmhouse was saved when he was given permission by Village of Sister Bay officials to put a new roof on the home. Following Lee’s death, the members of the Sister Bay Historical Society took over the project of refurbishing the home, and began to collect appropriate historical artifacts.

A current visitor to Old Anderson House Museum can also see the adjoining farm, now called The Corner of the Past. Since 2000, the Historical Society has acquired a post and beam barn, a machine shed, two log cabins, a granary, a picker’s cabin, a chicken coop, a 100-year-old sawmill, summer kitchen, blacksmith shop, two 1940s Liberty Park cottages and an historic log house which will soon be renovated. Hundreds of farm tools, implements and other Sister Bay artifacts are on display, as well as historic photos of the Sister Bay region.

Volunteer docents are on hand to guide visitors through the home and the farm. Or, you may want to tour the buildings by yourself with the use of our new “Discovery Pen” audio system, which allows you to learn more about the buildings and people of Sister Bay at 18 different locations. You’ll also enjoy walking the trimmed paths and viewing the beautiful flower and herb gardens. You can also picnic under the grand old walnut tree on the property!