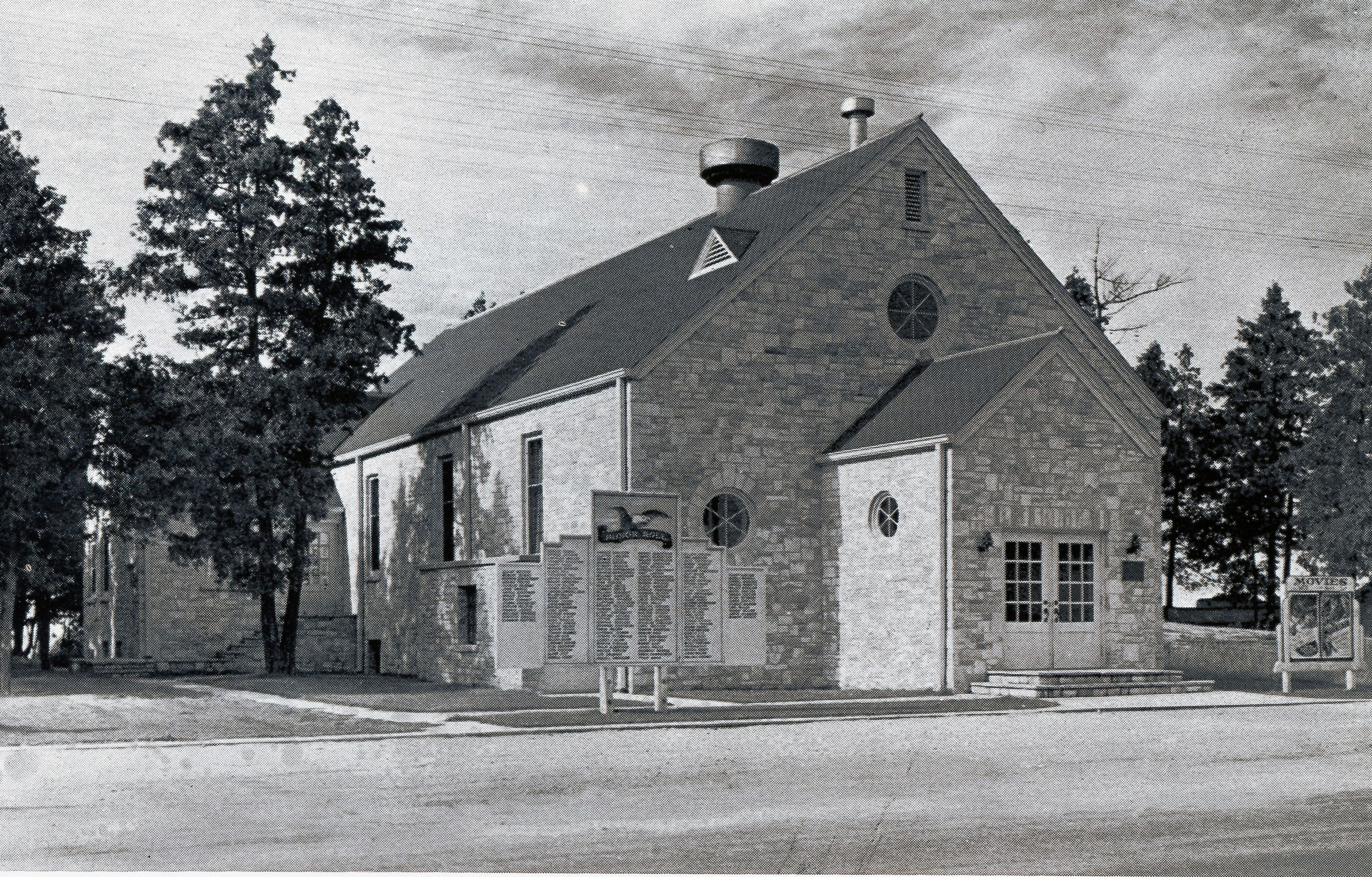 This beautiful building of native Door County stone is Sister Bay’s new community hall, housing auditorium and town hall as well as a library wing. It is located adjacent to the community’s Waterfront park and adds considerably to Sister Bay’s public facilities.

Sister Bay Will Dedicate New Community Center on Aug. 17
After a year’s work and many delays due to being unable to get materials at the right time, this village has completed a new community hall that will more than equal any similar building in any village of comparative size. There are a few minor details to be finished like curbing at the sidewalk, but it is far enough advanced so that Village President Gust Carlson Tuesday announced that it would be formally dedicated Sunday, August 17.

Many communities build halls, centers, and other places for various purposes, but it is doubtful if another could be found that would equal this one for the amount of money the village has spent. First, it voted the small appropriation of $6,000, then supplemented this with four more thousand for equipment, and as the spacious building stands today, it could not be replaced for $30,000. This was all possible by wise planning, with the help of the National Youth Administration, for with the exception of some skilled labor that could not be furnished by the NYA, all of the construction has been done by young men under the NYA.

Done in Native Stone
The building all done in native Door County stone is 76 by 40 feet with an ell 26 by 20 to house a public library. The auditorium will seat slightly more than 300 people at any community gathering the people of the village with to hold. There is a 19 by 26-foot stage for plays, school affairs, or any other type of entertainment. A projection booth, completely fireproof, is in the rear of the auditorium to house moving picture machines. Too, there is room for village officers to meet when business must be transacted in the interest of village affairs.

The hall faces on the main street of the village, with an entrance only a few steps from the newly laid sidewalks. The library entrance, separate from the main hall, is on the south side of the building with a new sidewalk running from the street to the door of the library. This faces toward the village Waterfront park, and the two make an ideal community center for in the park are seats, tables to be used for lunches, a bandstand, and dock jots out into the bay from the center of the park. The grounds around the new hall are being landscaped to make them a continuation of the park’s beauty spot.

In the basement of the new building, a complete kitchen has been installed so that complete meals may be prepared and served, and this will be used when the village holds its annual Homecoming event on August 3. The restrooms, heating plant, and air-conditioning plant are housed in the basement also.

The interior of the auditorium proper is one of the most beautiful public rooms in all northeastern Wisconsin, the walls being knotty pine, the ceiling in a block matching design, indirect lighting was installed by Clarence Brood, but just in case the need should ever arise, other types of lights were also included. The building has its own running water supply, for a deep-driven well was included in the program. The seats in the auditorium are of the latest type, modern and comfortable.

Ticket Booth Included
In case events are staged later such as movies and plays, a ticket booth was built in the entrance, and on the stage curtains that are beautiful as well as useful have been installed, with a backdrop behind when the front curtain is raised.

A very unusual thing about the whole building project is that no one has been asked to contribute toward the building. In most communities when a project of this size is started businessmen and others are asked to donate for this and that, but here Gust Carlson, the village president, and the supervisor of the building construction state that no one had been asked for one cent. The village people simply voted for the money to complete the building and had there not been enough, more would have been voted.

After the money was voted, Carlson and the village trustees contacted Samuel F. Johnson, Green Bay, district director of the National Youth Administration, and he wholeheartedly cooperated in putting the project through and came to Sister Bay many times to consult with Al Larson, Sturgeon Bay, the country NYA supervisor, on the work being done. Local committees are meeting this week with NYA officials to map complete plans for the dedication of the new hall. It is planned to present an appropriate program on August 17, to dedicate the beautiful building to the use of future generations who are now assured of having a proper and convenient meeting place for many, many years to come. Details will be announced as soon as plans are complete.