The shape of the conversation remains the same. Its timing varies only slightly from year to year, beginning as an offhand remark in mid-summer, by September swelling in proportions like an apple tree loaded with fruit, then dropping off gradually, like windfalls, through the autumn. It is heard in grocery stores, at hairdressers, in laundromats, and after church services. Usually, the participants are women, most often wives with the clear-eyed gaze of people who have come to terms with living in the county. The talk is of Cortlands, Macs and Red Delicious, of pies and sauce and pickles, of cold storage on the summer porch, of the proper bland for cider. There are discussions of canning and putting up apple butter. The dialogues end abruptly: there are apples to be peeled and cored, there is cooking, sweet aromas twining through the house, and there are spaces to be cleared in the freezer, cupboard, and cellar.

Door County is orchards. The fragrance and delicacy of blossoms in the springtime, the delight of children scrambling to fill their pails with fruit, the rightness of sipping strong cider on a crisp afternoon in October, the stark, orderly resilience of the bare trees in their winter theater of snow: the offerings of the orchards are as reliable – and changeable – like the seasons. 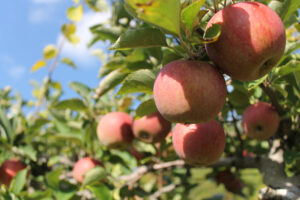 But it is the fruit itself that focuses attention. One does not need to know the name of an apple variety to enjoy its taste, but newcomers in the country may feel bewildered by the names that are everyday vocabulary to natives. In fact, there are relatively few varieties of fruit grown today in Door County, and five months of study is enough to memorize them all.

The fruit upon which the county’s fame hinges is the cherry. The first commercial plantings were made in 1896, with the number of trees increasing slowly until 1910 when the industry boomed. Early Richmond and Montmorency were the preferred varieties, both tart red cherries used primarily for cooking. The orchards steadily expanded, and the Montmorency became the favored cherry. It was larger and firmer than the Early Richmond, its fruit making for a superior “pack.” By 1959, there were 1,122,340 cherry trees in Door County, placing it first in the nation in the cherry tree population, and the only county in the USA with over a million trees. Over 95% of these were Montmorencies. From this peak in 1959, the number of trees declined due to poor economic returns, diseases and pests, and the high capital investment costs associated with the rapid mechanization of the industry, until only 351,100 trees were reported in 1974. This mechanization – primarily in the form of powerful shakers which have replaced the armies of laborers formerly needed to harvest the cherry crop – spelled the end of the Early Richmonds, for their soft flesh could not stand up to the rigors of shaking and rapid processing. Cherry acreage has increased lately due to recent high prices but changing land-use patterns dictate that the mark of one million trees is unlikely ever to be re-attained. But there will always be plenty of Montmorencies hanging heavy from the trees in the summertime, waiting to be placed gently in a bucket held by a small, eager boy or girl, or popped straight into the mouth, the sour juice screwing a bright face into an amazing wince.

According to an article entitled “Cherries and Door County,” published in 1948 by Alice R. Reynolds in The Peninsula, the periodical of the Door County Historical Society, it was the Jonathan apples of Joseph Zettle that led to the establishment of commercial orchards in the county. The taste and appearance of Zettle’s Jonathans, on display at the 1891 Wisconsin State Fair, intrigued Professor E.S. Goff of the University of Wisconsin and A.L. Hatch, a member of the State Board of Agriculture and himself an orchardman. They questioned Zettle, and he spoke in glowing terms of the climatic conditions and soil, which together created an ideal environment for the fruit trees he had begun planting in 1862. The county’s reputation in the era rested on its lumber and sawmill industry; little was known of its potential for cash crops. Persuaded to visit the county, Hatch offered this testimony to the Wisconsin Horticultural Society in 1892:

The modifying influence of the waters and ice of Lake Michigan and Green Bay gives the peninsula a cold, backward spring. It is generally considered that this retards blooms until the frosts are over. The fact is rather that it prevents a rapid, tender growth that would not be sufficiently hardy to endure subsequent frosts. Further south there is too little steady cold; fruit trees burst quickly into bloom with the advent of warm days, and the tender growth succumbs to subsequent frosts. In Door County the buds come on very slowly; often it is several weeks from the time they first swell until full bloom. During this time, they strengthen and become hardy.

Hatch also recognized that the loose limestone soil was well suited to the nutrient demands of fruit. It was the interest of Hatch and Goff, and later of Hatch’s son-in-law Delbert E. Bingham, that virtually created Door County’s orchard industry.

As the acreage devoted to orchards soared, cherries occupied about twice the land area planted to apples. The Soil Survey of Door County, published in 1919, estimated that 1700 acres of apples existed in the county. The Jonathans that had so impressed Hatch and Goff, and had led indirectly to the Door’s orchard explosion, were no longer a significant portion of the county’s apple crop. The Soil Survey reported “The apples grown most extensively on a commercial scale are the Wealthy, (Duchess of) Oldenburg, Fameuse, McIntosh, Dudley, Northwestern (Greening), Toman, and McMahon.” A census made in 1959 ranked Door County 32nd in the country with a population of 144,612 apple trees. It is thought that this figure has remained relatively stable since that time.

And what of the apple varieties most prevalent in 1919? The McIntosh, the large, deep-red, crisp yet juicy apple that originated on the Ontario farm of John McIntosh in the early 1800s has retained its popularity. The McIntosh-type apple is probably the country’s most widely grown, the Cortland, a member of the McIntosh “family” of apples, is also extremely popular. The Northwestern Greening, which originated in Wisconsin’s Waupaca County and is called “the original pie apple” by veteran Door orchardman Charles Krowas, is still grown on a minor scale, the green early-ripening fruits favored for their cooking qualities.

But the other apples – the Duchess of Oldenburg, imported from Russia, the Wealthy from Minnesota, the Fameuse or Snow Apple from Canada, the McMahon which originated in Richland County – are no longer of any commercial significance here. All agriculture has experienced increasing specialization in this century, and the growing of apples has been no different. In “Just How Good Were Those Old Time Apples?” an article by Lewis and Nancy Hill in the April 1981 issue of Country Journal, the demise of many of these varieties is blamed on a decline of the apple’s importance of the average American’s diet, a proliferation of new varieties which forced storekeepers and nurserymen to stick to a relatively few kinds, and increasing reliance on pomologists – literally, apple scientists – to determine which strains bore the most fruit, required the least attention and could stand rough handling.

The “old-time” apples are undergoing a renaissance of sorts among hobby orchardists, and neglected survivors from aged plantings are undoubtedly scattered about the county in abandoned orchards and forgotten farmyard. But in 1984, only three varieties accounted for more than 80% of Door County’s apple production, according to the University of Wisconsin Horticultural Extension Agent Cliff Ehlers: the McIntosh, Cortland, and Red Delicious. These names are familiar to those who have never laid eyes on an orchard, for they are commonly stocked on supermarket shelves, where they become pies and snacks of urbanites. This 80% will go almost entirely for fresh use, while the Northwestern Greenings are normally sold as processing apples for commercial sauce. New varieties of minor importance include the Paula Red and the Viking, the latter developed by Dr. Fred Gilbert at the Door County Agricultural Experiment Station as an early-ripening, red apple. The visitor to the county should sample them all, deciding for him or herself which tastes best after a bicycle tour, which holds its flavor under melted cheddar cheese in a deep-dish pie, and which make the sauce as tangy in February, taken from the jar, as it was the day it was put up.

The poor sister to Door County’s cherries and apples is the plum. Hatch and Goff counted plums among their first plantings, and by 1919 the county contained 200 acres of the deep violet fruits. But it was not until the early 1960’s that plum growing “took off.” The Door County Fruit Growers Association announced plans to begin canning plums for regional distribution, and the orchard men responded. Unfortunately, the plans never materialized, and most of the plum orchards were bulldozed and planted to other crops. Only two growers, the Krowas and Martin Orchards, still raise plums commercially, the Stanley Prune variety which, is its name implies, dries into prunes in arid southwestern climates. The Door County plums are marketed fresh because the humidity here usually induces rot before the drying process incomplete. However, it is possible in winter to find a few true prunes hanging from the trees, the cold having “freeze-dried” them to the desired consistency.

Those are the names: the Montmorency cherry, the McIntosh, Cortland, and Red Delicious apples, the Stanley Prune plum. That is not too many to remember, but keep in mind that the names are only labels. The fruits have the same wonderful tastes, produce the same luxurious blossoms, and grow in the same grand country, no matter what they are called.