During the years that our children were growing up, every disagreement between parents and their offspring was blamed on the “generation gap.” In our family, the most evident sign of that so-called gap was the aversion our five had to the Sunday drive.

Growing up in a home with no automobile, I spent most Sunday mornings hoping that some generous neighbor would ask us to “go for a little ride” on those endless afternoons. Our children, on the other hand, look back on the rides with their father and me as having been at best boring and at worst preliminaries to standing in the corner as punishment for their misbehavior once we were back home. 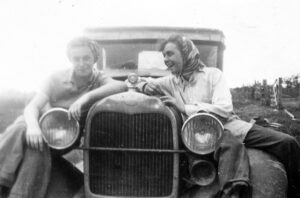 Of the several neighbors who took us for those Sunday spins, my favorite was Charlie Clark. An afternoon excursion with him was far more than a routine pass-by of familiar sights; it was an exciting adventure with no two Sunday drives quite the same.

Husband of Mother’s dear friend, “Auntie Verna,” Charlie was a man whom we would call “hyper” today. Like my father, he was a railroad worker, but unlike him, Charlie was an engineer with enough seniority even in the darkest days of the Depression to hold a regular “run.” Dad, a conductor who had been reduced to brakeman because of insufficient seniority, worked the “extra list” and had few Sundays to spend at home. Charlie, with his regular schedule, spent every Saturday preparing their family car for the long Sunday drives.

Mother and I always sat in the back seat. Charlie, one hand on the steering wheel and one on the back of the front seat, carried on a conversation with his wife, Verna, and us. He would have made a fine tour guide because he never failed to point something or someone of interest along the way.

On this particular Sunday which I remember well, he showed us a farm whose roof had been blown off by the “twister” the week before and a leather-faced woman with chopped-off straggly black hair trudging beside the road with a child following several feet behind.

“She had five taken away from her last week,” he informed us. “That makes eight they’ve sent off to the orphanage at Sparta.”

I listened more carefully. I knew about Sparta. I had come from there myself, Mother told me when I was only four months old. Why would anyone have her children sent there?

“Can you blame them?” Mother said softly, leaning forward so that she thought only Verna and Charlie would hear her. “Remember when they found her in the ditch with that old reprobate?”

The two in the front seat nodded, and much as I wanted to ask what a reprobate was, I sensed no one would tell me. I repeated the word to myself several times so that I would remember to look it up later. We had had a lot of rain that summer, so maybe the woman had needed whatever a reprobate was when she was in the ditch.

“Today,” Charlie announced as we drove away from our house, “We are going to drive west of town first, then go north to the tenth crossroad. After that, we will go east until we hit the highway, turn south and wind up back here. A perfect square! This will make just the right distance for the afternoon.” The right distance, he should have said, if we had no car trouble.

First, Charlie became so interested in what he had to show us that he lost count of the roads. Verna insisted that we had passed ten, but he was sure that the next one was the tenth. I did not mention that I had been counting carefully and knew we had already passed the sixteenth road. I wanted that ride to last! At the seventeenth he turned and drove along confidently, leaving a haze of dust behind us.

We had not gone more than a few feet when the engine began to sputter. He turned halfway around in his seat and explained that sometimes the car “acted up,” but that he had completely overhauled it the day before and knew nothing serious could be wrong.

After several more sputters, each weaker than the last, the car stopped, luckily, Mother said later, not in the middle of the narrow road.

“Just need a minute to adjust the carburetor,” he muttered as he jumped out, took several tools from the box on the running board, opened the hood, and set to work.

At Verna’s suggestion, we opened the side curtains – the late June sun was warm. Charlie had rolled up his sleeves and was busily removing parts from under the hood. Carefully, he laid each piece on the fender. “Have this thing going in a jiffy,” he assured us. Mother patted her forehead delicately with a white linen handkerchief meant only for show. Verna unfastened the top button of her dress and fanned with her purse.

I noticed water in the ditch and some flowers growing along the road. “Can I get out and pick some flowers?”

Mother shook her head, but Auntie Verna interrupted. “Why not let her, Virginia? Maybe we should get out too and stretch out legs.”

“Don’t wander away now,” Charlie warned. “I’ll be ready in no time.”

“I’m going to make a dam,” I announced watching the water course along the ditch. “I see some stones and pieces of wood down there.”

“Don’t get your feet wet,” Mother cautioned, “Those are your best shoes.”

With her nod of approval, I took off my Sunday shoes and half sox and tossed them into the back seat. She and Verna walked away from the car.

The dusty road was hot on my bare feet, the roadside grass sharp and prickly, but when I stepped gingerly down into the ditch, luscious, cool, soft mud oozed between my toes. Painstakingly, I gathered stones and bits of sticks and built a dam so that I had a tiny pool where the water came almost to my knees. As I scouted around for a larger piece of wood to use for a boat, I was careful to keep the bottom of my dress dry so that I would not arouse Mother’s wrath. I found one beautifully flat bit which made a raft to float about in my minuscule lake.

I knew now why that woman had been in a ditch even if I had no idea what a reprobate was. But why, I wondered, had her children been sent to Sparta? They would have had fun playing in the water.

By the time Mother and Verna returned from their stroll, I had made two tiny rafts, tried racing them, and when that did not work covered then with flower petals and pushed them around with a couple of branches. My feet were gloriously cool, and I hoped Charlie would never fix the car.

Mother, on the other hand, was so nervous that she stopped talking altogether and sat in the hot car twisting the lovely handkerchief around her fingers. Verna, by contrast, seemed contented and calm. She watched my venture with the rafts, tore off a piece of Charlie’s wiping rag, and made a sail for one boat. The sun was a huge red ball in the west before we finally continued our way, ending up much farther north than Charlie had planned. 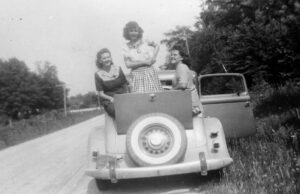 “I was never so upset in my life,” Mother told Dad later. “I could see us spending the night out there – not a house in sight – while he monkied with that car. Never again will I go for a drive with him!”

Happily, however, she relented so that we had many more Sunday drives. The car broke down obligingly nearly every time but never again at the special ditch. Although admitting to some disappointments when I learned the meaning of reprobate, I kept my little rafts, each complete with a sail, on my lap in a paper bag on every Sunday excursion with Charlie. But like so many childhood pleasures, sailing flower-petaled boats in the cool waters of a roadside ditch was over. Thinking of it now, perhaps the failure to provide our own children with an afternoon like one with Charlie accounts for their dislike of Sunday drives.