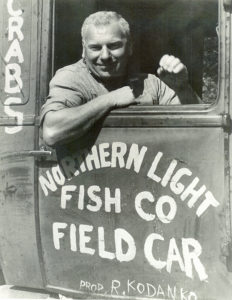 A good friend, especially to my aunts, Gretna and Elaine, Robbie Kodanko was a Norwegian bachelor who was a farmer and a fisherman. He had a big laugh and it rang out loud, along with Al Johnson’s, at the counter in Al’s restaurant. This was a common place for locals to gather for a coffee break and a time to shoot the breeze. Elaine could keep up with the storytelling and jokes without even trying.

Robbie had an old black Ford with “Northern Light Fish Co.,” the name of his business, painted on the side for advertising. His truck had an old timey ear-piercing horn — “KA-CHOOOOOHAAA.” He would drive in parades, smiling, waving and blowing his horns to the giggles and cheers of the onlookers.

Robby was a good-hearted free spirit. He wasn’t very tall but he was built strong and had big hands. He had a deep laugh and a wide grin. One afternoon in January 1963 he had driven out to make a lift, out near the shoals by Sister Islands. He had two helpers with him and the back half of the truck was filled with nets and heavy with fish equipment. There was black ice on the surface and people said he should have known better….the front of the truck broke through the thin ice. Then his brother Eddie, in the back, jumped safely clear. The passenger in the cab was Evert Sitte — that door was always left open in case of trouble. His door was open and Evert hit the water but was able to swim and slide himself back onto the hard ice with Eddie’s help. However (not unusual among fishermen), Robbie couldn’t swim and as he struggled he tangled himself in the nets with his big heavy rubber boots, boots that were now catching the nets with their buckles.

The truck and Robbie and the whole load went down into the dark water. The survivors quickly caught hold of the net and with great effort pulled him out of the water and up on the ice. It was just horrid, as he had already drowned. What makes the story even sadder today is that if guys back then were trained and knew about CPR, they could have possibly saved him. The undertaker said he had only been in the water about two minutes. The town lost an icon and the whole of northern Door mourned his loss.