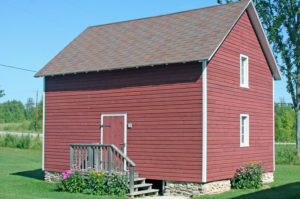 The signature building of small-grain farming in the mid-west is the granary. Hundreds of these buildings still stand in Wisconsin.

Used for storing grains, the granary is typically constructed of wood and is commonly set on some sort of concrete or stone foundation that raises the building off the ground and provides ventilation underneath. Raising the building also prevents rodents and insects from entering the granary.

Willard and Clarissa Kramer donated the granary to the Corner of the Past in January, 2000. Although it was only moved from a few blocks north on Fieldcrest Road, it was originally part of the Alex and Emma Anderson family 80-acre farm. It was the first building to be brought to the 6.46 acres purchased by the Village Board of Trustees in 1999 for the Sister Bay Historical Society.