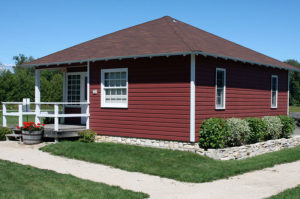 Like The Birch Cottage, The Balsam Cottage was formerly one of ten shore cottages at the Liberty Park Lodge on the north side of Sister Bay. Liberty Park Lodge was established in 1898, but the cottages along the shore of the Green Bay waters of Lake Michigan were not built until the 1920’s.

The two-bedroom cottage was one of five cottages on the north side of the grassy area and the nearest one to the water. The north-side cottages faced five cottages to the south of the property. Each cottage was named after a different tree.

This particular cottage now serves as the on-site office of the Sister Bay Historical Society.