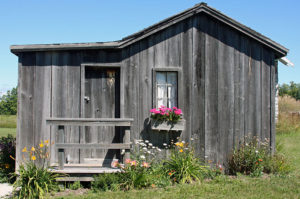 Prior to the advent of mechanical pickers, cherries and apples were harvested by migrant workers. They were primarily African Americans from the southeast, Native Americans and Mexicans (often including whole families) who moved from place to place on the back of flat-bed trucks to harvest crops as they matured. They arrived in Sister Bay in July as the cherry crop ripened. German war prisoners were used in the 1940’s, which explains the guard towers you still see in some orchards today.

Migrant camps were very common in northern Door County in the 1940’s, 50’s, and 60’s. The cabin located at the Corner of the Past was originally located on the Frank Logerquist farm and later moved to the Willard Kramer farm just north of the Corner of the Past. It is a “deluxe unit” compared to most migrant camps which were just one large room with a double gas burner, kerosene lamps, a table, wooden benches, a gas refrigerator, often shared by more than one cabin, and bunk beds attached to the back wall. Water was hauled to the cabins from a well on the farm each day in milk cans and barrels. Outhouses were the toilet facilities.

The migrant worker’s cabin was donated in 2000 by Willard and Clarissa Kramer.