Not many Door County resorts in this age of condominiums and investor groups can boast of being owned and operated by four generations of the same family over a period of almost 100 years… with a fifth-generation waiting in the wings!

Myra Hubbard, nee Jacobson, the pert 70ish redhead who owns and operates Hub’s Motel and Pier in Sister Bay with her daughter Vicky, can proudly attest to having been actively involved in the family business since her childhood, when the Liberty Grove Hotel was still in its heyday. Myra’s maternal grandparents, John Worachek and his wife Mary, (daughter of Wenzel Bunda) came to Door County from Kewaunee in the early 1890s. They first operated a tavern in Egg Harbor, located where the Blue Iris now stands. While they did not rent rooms, they did serve meals as well as drinks in the saloon. Several years later, they moved to Sister Bay, purchasing property on both sides of Highway 42 in Liberty Grove, just north of the village line.

There John labored long hours to build the hotel, doing most of the work himself. The first floor boasted a large “front room” designed for card playing and dancing, as well as a smaller lounge, dining room, and kitchen. There were 13 bedrooms upstairs, for rent year ‘round to tourists and salesmen. John then proceeded to build the requisite outhouses, a cottage on the beach to be used as a changing cabana for bathers, a wash house, an ice shed, and a small pier. No sooner had he finished building the hotel, opening it in 1894, than he built a mill on the lot next to it, only to move it several years later to one of the lots he owned across to highway. The mill, along with John’s chicken yard and casket business, prospered until it was sold to Liberty Grove Township and remodeled into the Liberty Grove Town Shop.

While John was busy with his many enterprises, most of the daily work of running the hotel fell on Mary’s shoulders. There was ice to be dug out of the piled sawdust in the ice shed, carefully rinsed to remove the last traces of dirt and grit, then loaded into the long oak box which took up an entire kitchen wall. Mary cooked all the meals on her black cast iron wood range, rising at five to bake fragrant kolaches (soft rolls filled with raspberries or prunes) and sweet-filled doughnuts called bufettes. Her three daughters, Anna, Mary, and Hattie, sometimes helped as she prepared breakfast, both for hotel guests and local patrons. After breakfast, she cleaned rooms, shaking rugs, dusting, filling kerosene lamps, and polishing the sooty gloved until they shone. Then there was always the washing…

Myra describes the washdays she remembers, “Grandma would haul water from the bay in big buckets, heat it on the stove in the washhouse, and then scrub the sheets, towels, and clothes with soap on the washboard. She’d wring them out, fill another boiler full of water on the stove, rinse and boil the wash to sterilize it, wring it out again with the old wringer she turned by hand and hang it on the line to dry.”

“At first she ironed with a cast-iron iron heated on the stove, but later she used a gas iron, and a mangle press for the sheets” Myra remembers.

The work was the hardest in the summer when the hotel was busiest, but the growing girls were lively and made their own fun – Annie, Mary Jischke, Annie Hilander, and several other girls reportedly formed Sister Bay’s first girls’ basketball team – and played in the hotel dance hall! And when one of the Goodrich steamships on its way to Mackinac made a stop in Sister Bay to disgorge city–weary Chicago tourists at Roeser’s Dock, or Wiltse’s cherry dock (now Anchor Marine), they were likely to be among the crowd gathered to meet the boat. Freight was unloaded and passengers, released from the confinement of the city for 2 weeks were deposited on the dock in a festive holiday mood.

John would drive his horse and buggy down the dusty road in the summer to the dock to retrieve his visitors. Arriving at the hotel, guests were greeted by Mary and her daughters, then showed to their rooms, where a large pitcher of soft cistern water and a large matching bowl awaited them for washing away the dust and grime of their journey. If they wanted a real all-over bath, they could take their soap, bathing costume, and towel down to the changing cottage and bathe in the refreshing bay water.

After dining, the kerosene lamps were lit in the lounge and front room, where guests could play cards, sing with the piano, or listen and dance to the phonograph, recounting the details of trips and the day’s events.

Once a week during the summer season, when the sun shone warm without the threat of rain, John hitched the horse to the wagon. Guests oiled on to enjoy a leisurely jaunt to pick wild berries at Europe Bay or Garrett Bay. Once there, they dined on the contents of the bulging picnic hampers Mary had packed and sent with them… cold chicken, salad, rolls, and pies, plus the blackberries, strawberries, or raspberries they’d been able to find growing among the grass and brush near the bay.

The winter brought a different type of client. Gone were the gay summer visitors, back to the city on the Goodrich boats to make room for salesmen servicing the local businesses and traveling doctors and dentists, hanging up their temporary shingles. There more prosaic visitors arrived by wagon, cutter, or stage. Myra recalls, “I remember the lounge being cleared, and the dentist setting up his chair so that local people could come in and have their teeth worked on – same with the doctor. People knew when they were coming, and would queue up to be treated, while the rest of the business of the hotel went on as usual.

Although the hotel was open during the winter for years, later, Mary operating the business alone, kept it open only during the summer. Life became easier when electricity and running water were added in 1930. By this time, Mary spent only summers at the hotel, wintering with her daughters, Annie Jacobson in Wilmette, Illinois. Mary and Hattie had grown up, moved, and married; Annie married Mattie Jacobson and had a daughter, Myra. Throughout the years Annie and Mattie moved from Plum Island to Milwaukee and Chicago in the Coast Guard. Annie has come back every summer to help her mother during the busiest part of the tourist season. Mary died suddenly at the age of 67, of a heart attack, while raking the hotel lawn. She has run the Liberty Grove Hotel for 41 years, from 1894 to 1935, most of that time singlehandedly except for her daughter’s timely help.

It is ironic that much of what she had labored for all those years should have vanished within a year of her death. 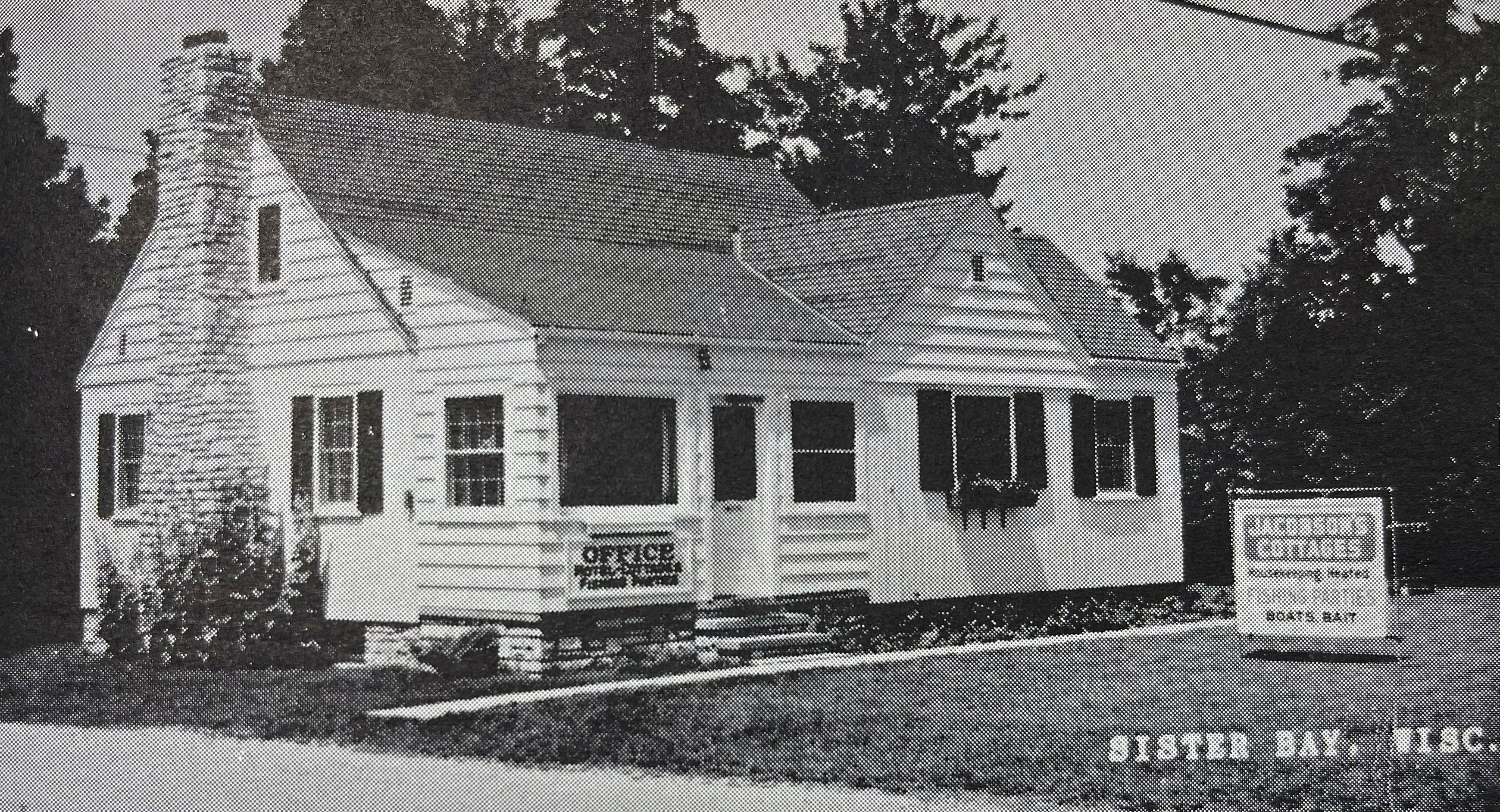 Annie and Mattie were newly retired from the Coast Guard. Their daughter Myra had married Mickey Hubbard the previous year and come to northern Door County to teach school; Myra taught grades 6, 7, and 8 at Wildwood, while Mickey was the principal for the high school (grades 9 and 10) at Ellison Bay. After Mary’s death, before the 1936 school year, the couple moved into the vacant hotel with their infant daughter, Anna Gay. Two months later during the Thanksgiving holiday, a fire started in the chimney. The old hotel and everything in it burned to the ground; only the outbuildings and cottages were spared.

Despite their losses, Annie and Mattie returned to Door County permanently to run the business. A son, Ron, was born to Myra and Mickey, and they moved on to Sevastopol and then to Green Bay to teach and bring up their family, while Annie and Mattie reshaped the property into Jacobson’s Cottages. They remodeled the original cottage and built two more on the shore as well as two rentals on their remaining property across the road. When Mattie died in 1937, Myra, like Anna before her, returned from Green Bay summer after summer with her family to handle the work. Mickey took hopeful tourists out on fishing parties in his charter boat from the small pier John had built. In 1950 has also began to rent boats and motors for fishing and waterskiing parties. Annie ran the business for 22 years, from 1935 until her death in 1957, living in the original cottage in the summer and often spending the winters in Green Bay with Myra and Mickey.

After Annie’s death, Myra and Mickey took over the resort. They remodeled the existing four cottages (one had burned) and built ten new motel units in 1958, renaming the business “Hub’s Motel and Pier”. They then bought a two-story house from Mr. Moor, an employee of Roeser’s Lumber. Sam Erickson moved it for them from Roeser’s lot to the foundation prepared for it next to the original cottage. The house made it possible for them to live on the property year ‘round with their 5-year-old daughter Vicky; Ann Gay and Ron being away at college.

In 1960, the couple built a large new dock, which provided a boat ramp and slips. Business flourished over the years; three “Vicky” ski boats and four mahogany “Myra” tour boats ran from the resort, along the perch and bass fishing charters run by Mickey. During these years, while daughter Anna Gay Pahlow and son Ron made their lives and businesses in Green Bay, youngest daughter Vicky “grew into” the business, making her the fourth generation to welcome guests to her family’s resort. After Mickey died in 1977, Vickey assumed an even larger role in running the business. “She’s been helping us manage the place for almost 20 years,” Myra asserts, “even since she was old enough to run errands and clean rooms.”

Ron, whose five children make up the fifth generation to summer on the property spends as much of summer as he can in the original cottage, which he now owns. And while the bayside property remained intact, Ron has been able to re-acquire those lots across the highway which were sold off during the years, including the old Liberty Grove Town Hall on the corner of Hill Road and Hwy. 42, and the Liberty Grove Town Shop building (John’s old mill). They are now a gallery and a shop, respectively. He also helps run the “Hubbard Brothers” charter fishing boat.

How does a family keep a business like this alive and thriving through 94 years, a fire, five generations, and a depression which caused the failure of many businesses and resorts? Myra would say, by hard work, being willing to take what’s there and make the best of it, by adapting to changes, and most of all, by supporting and helping each other through the inevitable hard times; in other words, by being a family.