Like the settlement of much of America, the history of Door County is a history of the relationship of people to the land. With a spirit of optimism, settlers came to this rugged, isolated area seeking a better life from its forest, soil, mineral, fish, and wildlife resources. As they tamed the land, early inhabitants encountered stoney soil and formidable underlying bedrock – characteristics that shaped the peninsula from its very beginnings and which even today remain a major influence upon land use and development. 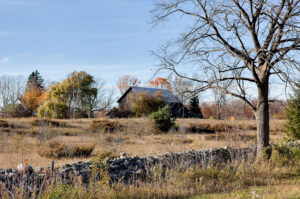 For a few, this mass of limestone provided opportunities for a source of income from quarry and kiln operations. But for many, especially farmers, it was cursed as a perpetual obstacle to progress, development, and earning a livelihood from the shallow, rock-laden soil. Thus, the annual ritual of removing the ever-present stones became part of an agrarian way of life. These by-products of nature and the plow were then stacked in piles or placed around the edges of cultivated fields. Here, they defined ownership boundaries and formed natural barriers for wandering livestock. Today, with agriculture only a shadow of its past abundance, stone fences in Door County remain a distinctive feature etched upon the face of the landscape. They survive as reminders of our past and a time when people had a close and vital relationship with the land. They are indigenous cultural artifacts – symbols of sweat and toil, as well as the pride, hopes, and dreams of countless pioneers. For some descendants of those early settlers, stone fences also became part of a heritage of family folklore to be passed from one generation to the next. Thus, like important historical artifacts elsewhere in America, they can provide critical insights into a time when people built them and they, in turn, helped shape the way of life of their builders. Such was the case with my Door County ancestors. 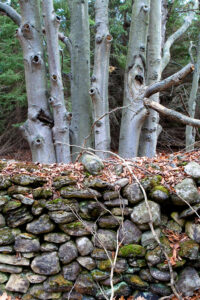 Our family roots have New World beginnings at the very center of the Door County peninsula. Here, amid the country’s best surviving concentration of stone fences, my paternal and maternal German-American grandparents lived on adjoining farms, in Section 28, at the eastern boundary of Egg Harbor Township. At this location, Grandfather William Tishler, who came from Gnezen in 1883 to escape the poverty and turmoil of what was then Pozen Province, purchased 80 acres of land for farming. A short time later, he arranged to have his wife, Augusta, and two children, Richard and Adolph, leave Germany to join him. To pay off his new farm, he worked for six summers at Thomas Toft’s limestone quarry near Mud (now called Moonlight) Bay in Baileys Harbor. With sledgehammers, crowbars, and pickaxes, he helped remove and break up the stone and loaded it on schooners and barges for shipment across the lake to Michigan. To spend Sundays with his family, he walked the nine miles to his home on Saturday afternoons and then trudged back to work the following evening. Immediately to the east, my maternal grandfather, Simon Sarter, had settled on an adjoining 80 acres of land in 1875.

Here, he took his bride, Emma to live in a modest log dwelling – the house where my mother was born. Grandmother Emma Sarter was the daughter of Carl August Schermer who had served with Company I of the 17th Wisconsin Infantry in the Civil War. She was also the granddaughter of Enfred Schermer, an early Bailey’s Harbor settler who came to the area in 1856. Both farmsteads were located along the south side of what is now County Highway E, in a small settlement of mostly German immigrants. A local newspaper referred to this area in 1873, noting that “Eight or ten families of Germans arrived at Egg Harbor this week, having purchased a section of land, three and a half miles east of the Harbor. They intended to make farming their business.” Surrounding their outlying fields, both families built rugged stone fences that survive to this day, including the handsome rock fence border between their farms. This very fence, because it was constructed by the grandparents on both sides of my family and my uncles and aunts, was frequently mentioned in the fascinating stories about early farm life that I remember hearing as a child. 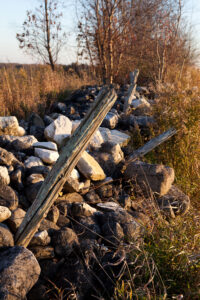 It was the annual spring ritual of harvesting the new crop of fieldstones that mother mentioned more than any of the other tasks of early farm life. This job was always one of sheer, grinding drudgery. The grueling work was done by hand and the rocks were hauled to an adjacent segment of the stone fence by a team of horses. The heavy, larger stones required back-breaking effort to move and frequently the wagon and straining horses became mired in the muddy thawing ground. Now, when I see the massive stone walls around the farms of my grandparents, thoughts of this toil come to mind, and I feel a deep and abiding reverence for their builders. Each of those countless stones was loosened, lifted up, hauled, lifted again, and then set in place.

To us who had never lifted those stones, they have assumed a totally meaning now. They have become perhaps the most intact and tangible reminder of our ancestors and their lives here.

The stone fences of Door County have long contributed to the special scenic character that makes the peninsula one of the most unique and intriguing landscapes of America’s heartland. Yet, just as their builders have now all but vanished, they too are being threatened by forces of change. During the last half of this century, miles of these striking ribbons of native rock have been pillaged or destroyed – the victims of highway improvements, subdivision development, new agriculture methods, and the constant demand for building stone. They and too many other traditional features are being swept away by powerful promotion and development. Yet, we can still take action to ensure that some of Door County’s best survival stone fences will always remain. Like the memories and events that surrounded them, they are part of our heritage – a legacy worth keeping as an enduring symbol of the people and history they once witnessed.